This topic is applicable to Sonos owners only.

This is the fourth and final stage of the assisted install option for your Raspberry Pi. The first step can be found here.

Cause AlbumPlays to autostart whenever the RPi is rebooted

The Raspberry Pi module of AlbumPlays needs to be already running whenever you listen to music on your Sonos system.

Controlling and observing the Raspberry Pi from your Windows PC

One of the greatest advantages of choosing to run the AlbumPlays Spy component upon a Raspberry Pi, is that it reliably just runs and runs, without need of attention. But there are some exceptions, where you may want to interact or peek inside:

You access the Raspberry Pi Remote Control Menu via a link, which is sent to the transfer location that you specified during install of the Spy module, or manually reconfigured with the Spy module’s _nas_path configuration option.

The file name of the control menu link is sonos_spy_menu.html. The menu is rewritten each time the Raspberry Pi is rebooted. It always has the same name, so you may create a desktop shortcut pointing to that file path and file name.

Configure your Raspberry Pi so that your track plays are recorded using your local time zone.

Your Raspberry Pi will appear on your local network as RASPBERRYPI, and its password is albumplays.

The Raspberry Pi device is an example of the “Internet Of Things”; a massive exponential growth of devices which attach to the Internet. Any of these could be targeted by hackers, and you should not be one the 15% of users, who do not change their default password. .. A hacked Raspberry Pi in your network endangers more than just your track play history.

The Raspberry Pi is an extremely successful example of the “Internet Of Things”. It is currently the third best-selling “general purpose computer” ever, behind Apple Macintosh and Microsoft Windows PCs. This means that the default password for each Raspberry Pi is known to everyone.

AlbumPlays has already taken a small step towards securing your Raspberry Pi, as it has changed its password, from the default of “raspberry“, to “albumplays“.

You can change the Raspberry Pi hostname from the default of *RASPBERRYPI”. This could be useful if you have more than one Raspberry Pi to add to on your network, or you want rename it to something which better describes its function.

click here for how to change the network host name

You should make a bootable copy of RPi SD card, ie.:

How to use the clone SD card:

Configure RPi to send an alert email if problems arise

You can configure the Raspberry Pi to send yourself an alert email if some problem stops it from storing track play observations. It will also send you a confirmation email each time the Spy O&D is restarted or terminated.

And then you need to transfer the encrypted email credentials to the Spy Transfer database on the Raspberry Pi. 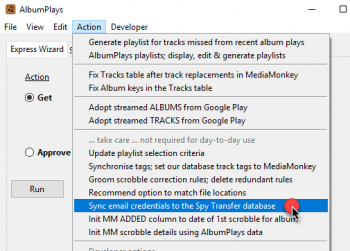 And then, since the Raspberry Pi is unattended, you need to supply it with the encryption phrase that you used to encrypt your email credentials, as described here

Then use the raspberry Pi Control Menu to reboot the RPi.

Verify that all is configured OK by checking to make sure that you received a “start-up” email from the Raspberry Pi Spy O&D module.