The aim of this step is to “seed” your database with any historic scrobbles stored in your Last.fm account. This step is optional; there is no problem if you want to start using this application without loading your history.

Seeding the database with historic scrobbles can be a tedious task. There are other options:

The next few sections of the Users’ Guide describe the seeding from Last.fm option. You need to read these sections regardless of which option you choose, as the facilities described here are those that you will use of a day-to-day basis to handle any scrobble mismatches. The same tools are used if you are a Google Play user, and are wanting to import information from your Google library.

Instructions showing how to use the alternative start-up options are found in the FAQ.

If you are interested an explanation of why scrobbles become “unmatched”, how it is a pain, and why this pain will go away, then open up the following closed section.

Cause of the difficulties, and the good news

Once you have obtained your historic scrobbles from Last.fm, we need to match these up with the same tracks in MediaMonkey. This can be difficult as the scrobble tags may be different to your current track tags:

Also, Last.fm doesn’t record the source of the music that you have scrobbled. This means that we will not be able to distinguish between plays from your own music collection, and plays from streamed services. This is a pain, because it means that plays of your own tracks, which weren’t automatically matched to MediaMonkey due to any of the above reasons, may be buried amongst all of the streamed plays of tracks which you do not own, and have not loaded into your MediaMonkey database.

So the task can be tiresome, but the tool described here attempts to reduce that pain level. It is a doable job; when I seeded my own database back in 2011, I had 54 thousand scrobbles, and I managed to match 96% of them. The unmatched were mostly some dabbling that I had done with streamed services.

And the good news is that the pain goes away once you start upon your day to day plays, after you have seeded your database:

The first stage of this step is to import a batch of your historic scrobbles, from Last.fm, into the AlbumPlays database. An empty database was created during installation, and the application will be pre-positioned to run the “Get” action. Press the “Run” button. 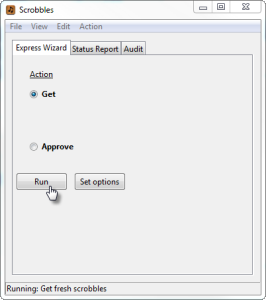 AlbumPlays has been set up to initially limit the number of scrobbles that we read from Last.fm. It is intended that you retain this setting only while proving that AlbumPlays is functioning correctly, and to keep volumes small while you are learning how the applications works.

This is an example of the expected output. The log window is the black panel underneath. It starts white, and turns black once the step has completed. The “i” icon in the overlaying panel indicates that the step was successful, and completed without incident. The section which I have highlighted on, the black panel, shows that we read just a limited set of our historic scrobbles; I have 1052 “pages” of scrobbles to download, and so far have asked for just 3 pages, a small step, but every journey has to start somewhere 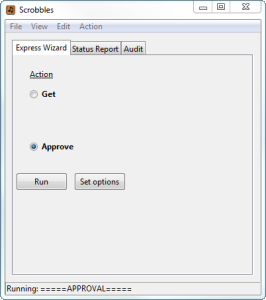 So here is the pain; there are errors. The GET step downloaded 525 scrobbles from Last.fm, and 67 of them were unmatched against my MediaMonkey database!

At first glance this seems disappointing, but in my case it is accounted for by the fact that I initially started scrobbling while I was just beginning to rip my music collection. So a lot of my initial plays were from a streaming service, and many of those tracks will not match, as I don’t own the albums.

The ratio of problems will diminish as:

The UI is now offering the opportunity to call it quits with this batch of scrobbles. If you check the check box, and press Run again, the application will proceed, ignoring the unmatched scrobbles:

But we shouldn’t give up yet. The next stage is to fix some of these matching errors, so we will not use the “ignore” check box at this point.

NB: you can override the “Action” radio button setting at any time, to run multiple successive Get actions while the batch is open. The pot of unapproved scrobbles just gets larger, ie. the successive GETs do not overwrite each other.

Previous step: Configure the application for your environment.
Next step: Seed your database – part 2 – fix mismatches.