This mode is only available for Sonos owners. The term SPY refers to the fact that we are spying upon the Sonos units to detect Sonos PlaYs.

This is an overview of AlbumPlays running in SPY mode, which is where Sonos play counts are detected from direct observation of your Sonos equipment. In this mode, AlbumPlays can also import any plays made using other equipment by obtaining any unrecognised fresh scrobbles from your Last.fm account.

Background: see here for a comparison of this operating mode, versus Last.fm mode where all play counts are sourced from Last.fm.

The appearance and operation of AlbumPlays is almost identical across both modes. SPY mode actually includes LFM mode, as it uses that mode to obtain, match and process your non-Sonos plays. If you haven’t read the section of the User Guide covering the day-to-day operation of LFM mode, you need to do so, as this page only covers changes and additions introduced by SPY mode.

SPY mode is harder to install, but is easier to use. (open for details)

It is easier because you will have less issues to attend to:

The Express Wizard, which we saw before, is also the main screen for SPY mode. It is identical to LFM mode, except that it now has a radio button control so that you may toggle the Get action between: 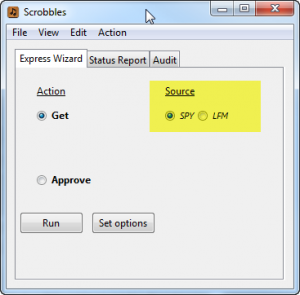 If your household has multiple people using the Sonos, you can chose to handle each differently. You can chose to scrobble each to their own Last.fm account, or group some together, or entirely ignore others. You may also decide whose plays to upload to MediaMonkey. … AlbumPlays has a simple but reasonably effective way of assigning plays to the correct listener. See here for a discussion of AlbumPlays’ multi-user capabilities.

Fresh Sonos plays are collected when you press the Run button while AlbumPlays is in the state illustrated above (ie. the Get action is selected, and you have the Source set to SPY.

As before, a Run Summary is displayed, and a blue Windows “info” icon indicates that there were no problems. 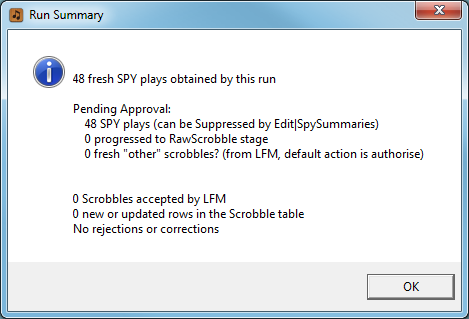 This is followed by summary report showing the album plays which were played; it has the following columns:

Press the F3 key if you wish to make any updates.

nb: you may suppress individual album plays as described above, but alternatively you can set up specific household listeners so that their plays never upload to MediaMonkey, and|or never scrobble.

As before, the approve action uploads the plays into MediaMonkey.

Playing from a streamed source requires less interaction than it did in LFM mode:

If you have configured SPY mode to take over the scrobbling task from Sonos, the Approve action also scrobbles plays, for nominated listeners, to Last.fm. … See the Benefits page for a brief description of the reasons that you may want to use AlbumPlays for scrobbling.

Now let us look at any plays that you made on any of your other devices; anywhere that you use your music collection, such as on your phone, your tablet, in the car, Sonos units at other locations, or on your computer at work.

Assuming that you confine yourself to just devices which scrobble, these plays will have already have been scrobbled to Last.fm.

Non-Sonos plays are handled as illustrated here. The differences are:

If Last.fm has messed with any of your scrobble tags, you may get scrobble tag mismatch issues, which should be handled as described in the the Last.fm section of the Users’ Guide

next step: AlbumPlays processing cycle: handling of any Spy observations which cannot be found in MediaMonkey

back to top: Spy mode index