nb. this section of the User Guide does not address the Missed Tracks playlist; that special playlist is covered here

Why does AlbumPlays do playlists?

MediaMonkey already has strong support for the generation of playlists, so why implement additional playlist support into AlbumPlays?

What is an AlbumPlays playlist?

AlbumPlays can publish playlists using the following sources as input:

Here is an example of each:

Example: from a MediaMonkey playlist source

Example: from an native AlbumPlays playlist 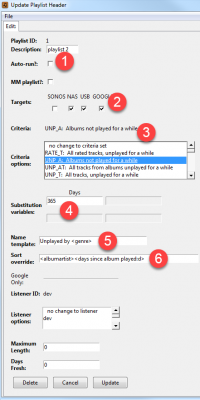 Use the Action|AlbumPlays_Playlists menu option to view the list of your playlist definitions.

Any auto-refreshed playlists are identified by a check mark in the Auto? column, as shown in the following illustration. 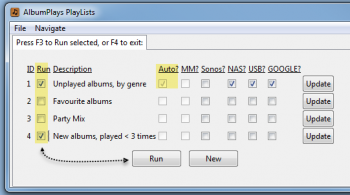 You may trigger the refresh of other playlists manually by checking their Run check-box, as shown below, and then pressing either the Run button or the F3 key. … nb: you may also make temporary one-off overrides here, to the playlist export targets, by changing the check box settings for the Sonos, NAS, USB, or GOOGLE columns.

Whenever a playlist definition refresh is triggered, all of the actual playlists which it generated will be refreshed, and any playlists left empty will be deleted.

Sonos owners: there is no need to trigger a Sonos Music Library update each time that you refresh a playlist. It is true that Sonos will not see a new playlist until after you have triggered a Library Update, but once Sonos knows of the playlist’s existence it will display the current contents whenever browse or use it, without requiring additional library updates.

Google Play Music: some preparation is required before you can use your Google Play library as a target.

next step: design MediaMonkey based playlists