This page covers the handling of any “corrections” or rejections made by Last.fm to your scrobble submissions.

This page only covers track or tag changes which have been prompted by a “correction” from Last.fm . If you are seeking to generate your own tag change you should read this section of the LFM Users’ Guide.

This material is relevant only if you are using the AlbumPlays application to scrobble to your Last.fm account (ie. you have tuned the native Sonos scrobbler off, and have turned on AlbumPlays scrobbling as described here).

Most scrobbling programs, including the native Sonos scrobbler, ignore the scrobble correction or rejection feedback given by Last.fm. AlbumPlays does alert you to feedback provided by Last.fm. You can ignore these notifications, but on the other hand a lot of work has been done by Last.fm or Music Brainz to establish best practice tags for each track. This application makes it easy to use Last.fm corrections to help tidy up your collections.

The Run Summary display, from the Approve action, will alert you if there are any issues: 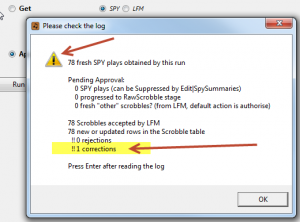 In the case of LFM corrections, the play will have already been uploaded into MediaMonkey and has obviously been scrobbled to your Last.fm account, so you can safely ignore the opinion of Last.fm if you wish.

Alternately you can review the list of corrections made by Last.fm, and those which you agree with can be automatically handled by this application. It will:

In the case of LFM rejections, you need to manually attend to the issues if you wish to scrobble them to Last.fm (see the section at the bottom of this page). The track plays will be transferred to MediaMonkey, as this part of the approve action is not affected by LFM issues. 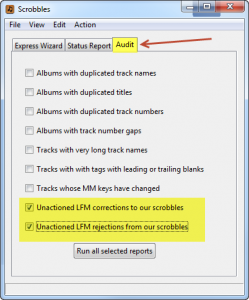 Here is a sample from the “corrections” report.

The first screen displays the list of un-actioned albums for which you have received scrobble correction notifications. Select those albums which you want to handle at this time.

You are then presented for a screen for each album that you have selected. The album screen shows the tracks affected, and shows the nature of the suggested correction.

The radio button for each track dictates how the track correction will be handled:

Press the F3 key to proceed through each of the albums that you selected on the first screen. Update or suppress actions are applied each time you press the F3 key. Press F4 at any time to cancel out from the process, ignoring any further album selections.

This application also makes visible any of your scrobbles which were rejected by Last.fm. LFM will reject any scrobble which violates any of their tagging rules:

You can suppress the notification by using the Action|ActionLFMScrobbleRejections menu item. This facility is identical to the scrobble “corrections” facility described above, excepting that there is no update facility, you only have a suppress option.

Suppressed rejection notifications will re-appear whenever you replay the track