As illustrated in the User Guide, it is best to handle Album action list (menu item Edit|ActionListAlbumBasedRules) before the Track level action list. This is because a single fix at the album level may fix all of the album’s tracks.

It is best if you run the Approve action, after updating the Album templates, before starting work on the Track templates.

2. When to use “Edit Tags” buttons instead of Action Lists?

The Edit Tags row buttons have some advantages, and some disadvantages, when compared to the Action List facility:

The Edit Tags buttons can be useful where:

Both facilities have the feature where a successful fix creates an ongoing correction rule for future mismatched scrobbles.

A very large batch of scrobble, or Google Play library, imports may result in a very lengthy Action List. If you ask too much from your computer’s resources, the Action List editing facility may become sluggish, or may even break.

AlbumPlays protects against this by setting a maximum row limit for an Action List. By default this is limit is set at 200 rows. If the size of an Action List exceeds this limit, AlbumPlays will segment the Action List into sub-batches. This limit of 200 is the total amount of the visible, plus hidden (ie. Streamed + Fixed), Action List rows, for whichever level that you are trying to edit (ie. Album-level or Track-level Action List).

If this limit is exceeded, instead of being taken directly into the requested Action List, you firstly will go to the above panel, which allows you to access each of the sub-batches, one at a time:

This sub-batch mode is less convenient than the normal Action List editor, as it disables some functions:

The best strategy is adjust the maximum Action List batch size default, to whatever your computer can comfortably handle.

And then set the size of the Get action batch size to something which is likely keep the Action List within this limit. … This something for you to judge. It is affected by your tags, and the amount of streamed material you listen to, and how many tags are being loaded into your combo-boxes, and the amount of re-tagging you have done since scrobbling, or uploading, the tracks

AlbumPlays will successfully match scrobbles to your tags regardless of case differences. eg. “Let it Bleed” matches, without assistance, to “Let It Bleed”.

5.Take care not to flag your own albums as being streamed

If you tell AlbumPlays that an album or track is streamed, you are indicating that you don’t own the item, and it is not in your MediaMonkey database. The rule will mean that the album or track will be automatically suppressed from any future unmatched Action List.

You can review any albums in the current batch, which have been designated as being streamed, either by:

You may also view persistent streamed rules by using the Edit|StreamedRules menu item. You can delete unwanted rules with this facility.

If a composite album is unmatched because the album name has changed, there will be a separate template row for each artist having tracks on the album. This situation would require that you update each of the artist rows in order to make a rule which updates the album name for all tracks. The same thing if you want to mark the whole album as being streamed.

The All artists template has no combo-box for album name corrections, but you may paste the correct album title from MediaMonkey, or enter it via the keyboard, or copy and paste it from one of the artist row’s combo_box.

7. Handling composite albums, when an artist is mistagged. 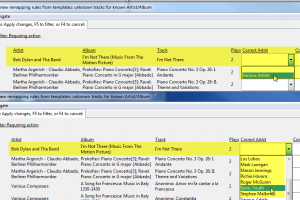 You can trigger the combo-boxes to be extended with all of the individual artist tags for the album. By default this option is off, but you can trigger it, for the current grid, via the menu item Action|DeepSearch, or via the “Deep Search” button at the bottom of the grid.

8. Referring to the full list of unmatched scrobbles while editing templates?

You may wish to refer to the list of unmatched scrobbles, while editing rule templates. This is possible, but it takes a small amount of preparation.

You need to display the list of unmatched scrobbles before opening the Action List. You do this by tapping on the Status Report tab on AlbumPlay’s main screen, and then pressing the Unmatched Raw Scrobbles button. This report is modal, meaning that you must close it before starting any other action in AlbumPlays, such an editing an Action List..

While the Unmatched Scrobbles report is open, take option File|ShowLastReport, or press the F8 key. This will load the unmatched listing into your browser. You can then review the browser version while working with an Action List.

9. If you have tracks with blank album tags

When Last.fm receives a scrobble with a blank album tag, it seems to “help” by supplementing your scrobble with the title of the album generally accepted as owing the track.

This false album tag will cause the track to be unmatched when it is re-imported from Last.fm. If want to create a rule to reset the LFM value back to your blank tag, you need to use a special token character, because if you leave the “Correct Album” value as a blank, the AlbumPlays application will assume that you are not making a change.

Use the ~ character to cause the album tag for the scrobble to be reset to a blank.

This functionality is turned off by the _no_blank_album_tags configuration as described here.

10. The combo-boxes are too narrow?

If the a combo-box is too narrow to see enough of the row to make a choice, you should stretch the whole window. Only the entry columns will be stretched, which hopefully will open up enough room to identify the correct row.

The editing grid is initially filtered, to enable you to better focus upon items requiring action. Only a single filter group is on display at the one time. You may progress from group to group via the F5 key:

If you are editing a very large Action List, your batch may have been broken into sub-batches. In this case the initially hidden items will have been removed from all sub-batches to allow you to get more done with each. You may suppress this default behaviour, and control which items to allowed into the editing grid via the following check-boxes:

By default, only the first item is checked, meaning that your action list will initially contain only items requiring your attention.

The “UnM” column, (album-based Action List only), shows how many of those plays are unmatched. … If UnM is less than Plays, the problem is likely to be at the track-level, rather than a whole-album issue.

Preceding discussion mostly focuses upon how you could fix mismatches by creating a rule to translate the scrobbled tags to your current tags.

Sometimes it is just best to update your current tags with MediaMonkey, so that they match the incoming scrobbles. If Last.fm has “corrected” your scrobble, and you have no strong preference for your own tag, it is simplest to just accept their correction.

Use MediaMonkey to re-tag your track, and then rerun the Approve action. … You should read housekeeping advice regarding re-tagging available here.

Important It is important that you do use MediaMonkey, and not some other tool, to do any track re-tagging. This is to ensure that your track and your MediaMonkey tags remain in synchronisation. Your scrobbles will be generated using your track tags, but AlbumPlays generally works by matching importing these & matching these against your MediaMonkey tags. You create difficulties for yourself if you have different tags sets for any individual track.

14. If the batch contains a lot of streamed items

If your grid contains a lot of streamed albums or tracks, you may mark the whole grid as being streamed via the check-box at the top of the streamed column.

Then un-check just the exceptions. … nb. a template row will be automatically unchecked if you select any item from either of it’s combo-boxes.

15. Identifying which of an album’s tracks remain unmatched? 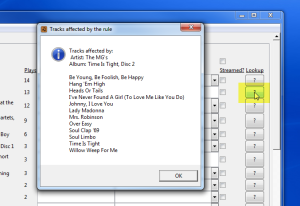 If you are uncertain which of an album’s tracks remain unmatched, causing a album template to be generated, you can display a list of the tracks affected by pressing the “Lookup” button at the right hand end of the template row.

16. You have redundant templates?

It is possible to generate a jumble of redundant rule templates. For example, maybe you make an incorrect entry into a rule template. The next approve action will correct nothing, the incorrect template will remain in the grid, and another template row will be generated for you.

Incorrectly specified templates cause no problem, excepting visual clutter which may confuse you during the editing cycle. They will be permanently deleted when you close the batch, but you may chose to manually delete them by blanking out both combo-boxes, pressing Update, and then running an Approve action. (nb. a quick way to blank out a combo-box entry is by selecting the blank entry sitting at the top of each combo-box)

17. Getting more fresh scrobbles with the Get action

You can also adjust the number of scrobbles downloaded from Last.fm by each Get operation. See the Last.fm section in the FAQ for instructions.

18. What to do when you have finished seeding your database?

You don’t need to do anything. Get actions will now download your current scrobbles, and the same processing cycle will attempt to match and use then to update your MediaMonkey database. It should become a lot easier now, due to:

You should open and review the suggested workflow discussed further down this page.

You should consider “vacuuming” your AlbumPlays database to do some housekeeping that will keep it in good shape and reduce any bloat that has been left over after all the inserting and deleting that is a natural part of the seeding process.

To vacuum your database, press the Set options button, and then select the vacuum radio-button as illustrated. Then run a Get action to trigger the vacuuming. 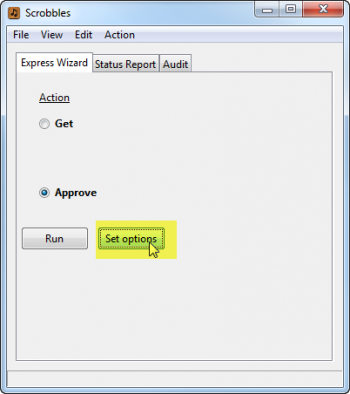 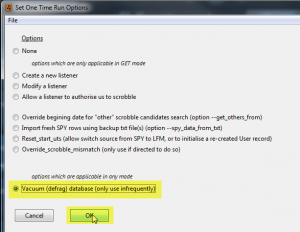 Sonos owners: you should also read the discussion elsewhere in the site, describing the merits of running this application in the mode where it directly detects your Sonos scrobbles, by observing your zones, rather than continuing to rely upon what Sonos manages to scrobble to Last.fm.