A Sonos blog quoted research showing that 50% of music is listened to while away from home. It also observed that we have passed the tipping point in a migration from personal music collections, towards streamed music services.

I think that “away from home” and “streamed music services” are somewhat connected, as the former is part of the push towards the latter. This doesn’t need to be the case, as technology has made whole collection availability while “away from home”, achievable at reasonable cost, and with minimal hassle, and without assistance from the bloat of someone else’s streamed collection.

If you are reading this blog entry, you are likely to be a music collector just like me. This affects two of the above benefits:

The next two benefits do present challenges while away from home.

I add one further wish into the mix. AlbumPlays playlists can reintroduce a sense of intimacy with a large music collection. They do this by enabling focused browsing, amongst a smaller auto-refreshed subset of my collection; ie. those tracks or albums which I haven’t heard for a while. I would like these active playlists to be automatically available, wherever and whenever I get a chance to enjoy my collection.

This sounds a tall order for someone with a large music collection, but current technology has solutions, and at reasonable cost. 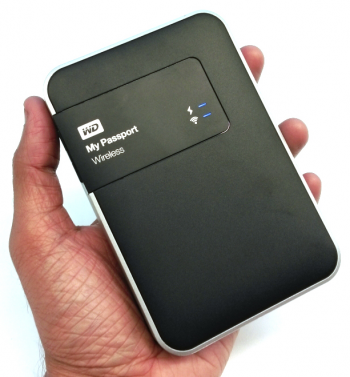 Something like a MY PASSPORT WIRELESS from Western Digital:

Pros
Can contain your whole collection.
Listen via your mobile device with headphones, or a Bluetooth speaker, or cast to a Chromecast device.
All plays are scrobbled to Last.fm, and therefore update your MediaMonkey play history.
AlbumPlays multi-target playlists are automatically generated, refreshed, and distributed. They work with these drives, just as they do against your main music collection at home.
Listen to music away from home without consuming your data cap or generating mobile data charges.
Cons
Regardless of the battery, a spinning hard drive is not really suited for the bumping about experienced while commuting.

Which size WiFi drive should I buy?

MediaMonkey can display the size of your music collection: File|CreateReports|Statistics.

This shows that my collection is 943gb, which is almost 1tb.

You need to allow space for the drives operating system and overhead, say 200mb. Also allow capacity for collection growth, plus any other files that you may backup to it.

I bought the 2tb model.

I have tried two manufacturers; Seagate & Western Digital. From this limited sample my recommendation is:

This recommendation is based upon two factors:

The combination of these two factors made the Seagate a poor choice for me. It took over an hour to index 40,000 tracks (ie. just 1tb on a 2tb drive). This was a one hour delay, before I could use the drive(!!), each and every time I powered the drive on. The device was fine if I left it running.

I went to the Seagate community support forums, where other customers also complained of the same issue. Neither customers, nor Seagate, were able to resolve the problem.

I also went through Seagate support channels. They were not across the problem, but did replace the drive. The new drive had exactly the same problem. …. My conclusion was that the Seagate drive was only suitable for small collections, ie. where the re-index task runs relatively quickly. … Also it looks like Seagate have now closed their Community Forums, which is not a very encouraging development.

I bought the Western Digital device. It also takes a long time to initially index the whole collection, but only needs to do it once. WD are confident enough in their support story to retain a Community Support forum.

Copy your collection to the drive

If your music tracks are on a NAS, it is best to sync your music to the WiFi drive using the backup facility that is part of your NAS, .

If your music tracks are stored on your PC, you could just use the backup utility which comes bundled at no cost with the WD WiFi hard drive.

Rerun your chosen sync process whenever you have a significant change to your music collection .. updates will run much faster than the initial load up.

When the drives boots up, it will automatically detect and index any new content.

Get the drive’s User Guide from here:

I have the following:

You can secure your WiFi drive by:

Obviously I am biased, but I think that AlbumPlays Playlists enhance enjoyment of a large music collection. See my blog entry on this topic.

One of AlbumPlays playlist features is that they are multi-target, meaning they may be used against your track master copies at home, as well as against the clone copies on your portable WiFi drive.

Also, there is a further reason why AlbumPlays playlists enhance a portable WiFi drive. As I mentioned above, the computer inside these drives is feeble, for cost & battery duration reasons. The downside of this is that browsing a large drive can be quite laggy. A playlist is an auto-refreshed, targeted subset of your collection. This smaller size allows the drive’s feeble computer to deliver targetted browsing in a much snappier manner.

AlbumPlays playlists also have a special option for whole-album listeners. An album-based playlist includes just the first track for each album, meaning that you get a compact playlist, which is more convenient to browse. The album is identified by its cover image.

Once you have selected an album, tap the row’s three dots, to popup a menu to bring up the whole album, allowing it to be queued. 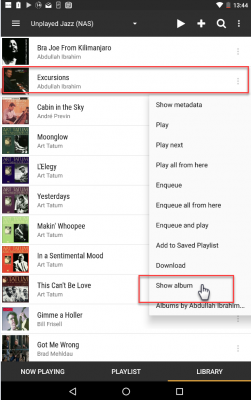 If you wish to use AlbumPlays playlists with your WiFi drive, you need to point the _playlist_track_location_prefix_usb option to the drive location where your tracks have been synced to.

Stream your own tracks from Google Play Muisc, via the Internet, when away from home. Google allows you to store up to 50,000 of your own tracks, onto their streaming server in the cloud, at no charge.

Pros
Enough capacity to store 4,000+ of your own albums.
Very acceptable audio quality.
Listen via your Google Play Music client on your mobile device, or cast to a Google Chromecast device. Meaning that your music collection is available when away from home, including while commuting.
AlbumPlays playlists are auto-refreshed & auto-distributed into your Google Play library.
Plays are scrobbled to Last.fm, and therefore update your MediaMonkey play history. Scrobbles use your own tags, not the tags used by the streaming service.
Cons
Mobile telecom charges, or data cap consumption, apply when playing from a streamed service such as Google Play Music

It is quite achievable, and straight forward, to:

Contact me if you have any suggestions, questions, or corrections.