This page covers displays and tools, relevant during the progression of fresh Spy observations through the AlbumPlays processing cycle. … There is a specific focus upon any Spy observations which cannot be matched back to your MediaMonkey database.

For the following illustrations I listened to 11 tracks. This included 1 track by Badi Assad, which was streamed from my Google Play library, and which was not in my MediaMonkey database.

This report is displayed towards the end of each Get action.

The Badi Assad track which was streamed, and was not in MediaMonkey, is identied as being streamed and unmatched.

nb: The report may also be used to verify whether AlbumPlays is able to match plays from your local library using the track location method. Provided the right hand column is blank, you can be confident that track location matching is working correctly. Otherwise see here

Press F3 if you want to make any updates

The Run Summary is displayed at the end of each AlbumPlays action.

The Run Summary from the Get action shows that I have imported 11 Spy observations, but discloses nothing about their streamed or matched|unmatched status. 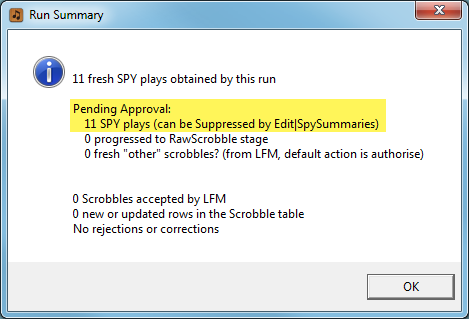 There was no chance to intervene, and other than the little message at the top of the display, there was no indication that the track was silently discarded. The default behaviour is intended as a convenience to streamline the application if you listen to a lot of streamed music which is not part of your own collection. 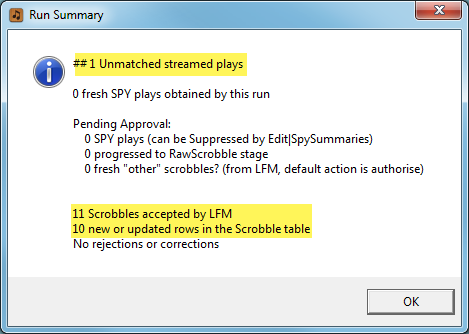 If you do not listen to a lot of new streamed material (ie. you are not expecting a lot of unmatched stream plays), you can configure AlbumPlays to always pause, so that you may review these unmatched items.
If you do listen to a lot of new streamed items, and want manage rather than ignore them, you should consider turning on the Streaming Wizard extension to the Approve action, which is illustrated in a following section.
[
.. return to top

The Status Report tab shows the current status of AlbumPlays processing. After the Approve action has completed, the batch details rows are empty, but until you start the next batch by a Get action, the bottom half of the screen still allows access to details from the prior batch. 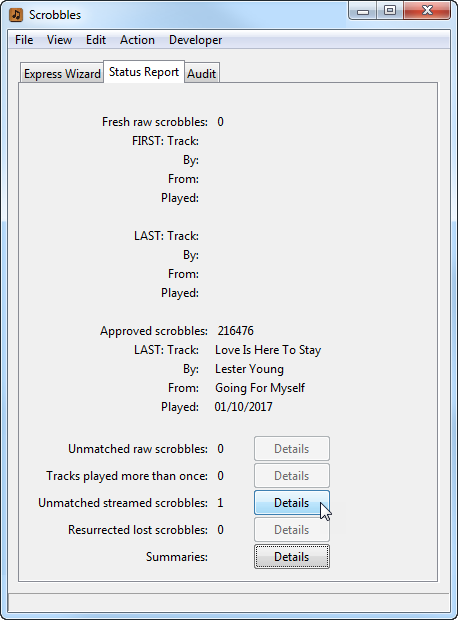 We can see that there was 1 unmatched Spy observation which was ignored. Press the button to see the details. 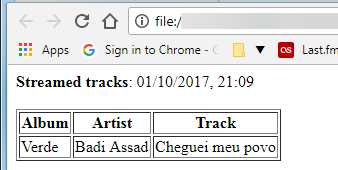 The Streaming Wizard is an optional addition to AlbumPlays’ regular Approve processing action. The Wizard is aimed at simplifying the handling of unknown streamed items.

The intended use of the Streaming Wizard is as follows:

Further information about the Streaming Wizard is available here.

How unmatched Spy observations are handled

Spy observations may come from either of two sources:

Unmatched Spy observations are generally only expected from the last mentioned situation; ie. streamed tracks, which are not in your MediaMonkey database

Spy observations are different to scrobbles imported from Last.fm for two reasons:

For these reasons the default behaviour for unmatched streamed Spy observations can be different to unmatched scrobbles imported from Last.fm. We take extra care not to lose any LFM scrobble which may have come from your local library. For Spy observations, since we are sure that the scrobble was streamed, and because streamed material often may generate many unmatched observations which are expected, the default action is ignore them. The default may be changed as described here.

next step: Add, modify, and authorise to scrobble, your household’s Listeners